For Ken Schiefelbein, answering God’s call has been his life’s book 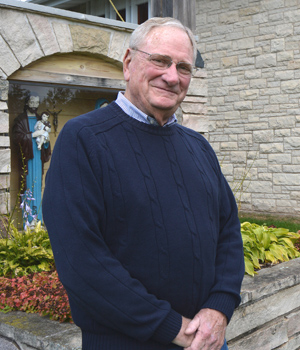 Your Catholic Neighbor: Ken Schiefelbein (Lisa Haefs | For The Compass)

Ken Schiefelbein has been having a running, but often quiet, dialogue with the Creator for 78 years.

“The Lord communicates with us every day in some way,” said Schiefelbein, a member of Holy Family Parish. “We need to get up every morning and say, ‘Here I am Lord, what do you want me to do today?’”

A self-labeled “cradle Catholic,” Schiefelbein has spent his lifetime doing exactly that.

As a young man, he seriously considered the priesthood, attending St. Francis Seminary outside of Milwaukee. There, he curated lifelong friends, including Fr. Charles Hoffmann, who will celebrate his 60th year of ordination (more than 40 of them spent at St. John the Evangelist Parish in Antigo) in 2023; Fr. Jeremiah Worman, who died in 2018 after 51 years in the priesthood; and Fr. Michael O’Rourke, who died in an accident in 2010 after 40-plus years in the priesthood.

“I really met some good guys at seminary,” Schiefelbein said. “We all stayed in touch.”

But as the date for ordination neared, Schiefelbein chose another path.

“I talked to God about his plans for me and I said I thought there was another role,” he said. “God agreed.”

He entered the business world, meeting and marrying his wife, Barb. For the past 54 years, they have been “Barbie and Ken,” and, like the venerable Mattel couple, show no signs of losing their luster.

“Barb is my partner in all that I do at Holy Family,” Schiefelbein said.

They raised a family, which grew to include two sons, Peter and Nick, and four grandchildren while remaining active in the church, including teaching religious education classes in Milwaukee.

“After we married, I was transferred to Oshkosh, where Fr. O’Rourke was associate pastor at St. Peter Parish (now Most Blessed Sacrament),” Schiefelbein said. “He welcomed us with open arms, found us babysitters for our sons and baptized them.”

With God whispering in his ear and Fr. O’Rourke at the pulpit, Schiefelbein quickly became involved in activities throughout the parish. He served on the church board of directors and the couple’s sons attended nearby Lourdes Academy. It was a busy, productive and joy-filled time, he said.

Decades later, the next chapter in the Schiefelbeins’ journey took them to Vero Beach, Fla., famously known for decades as the spring training home of the Los Angeles Dodgers baseball team. Schiefelbein managed several Subway restaurants for his now-adult son Nick and played an active role in St. Helen Parish, including leading Bible studies and men’s groups. He and Nick also guided an annual men’s retreat to St. Ignatius Cathedral in West Palm Beach.

The family also were regulars at Dodgertown, enjoying the camaraderie and sunshine at the legendary spring training facility.

On one memorable Sunday at St. Helen Parish, the pastor announced a special guest usher. It was Tommy Lasorda, World Series-winning manager of the Dodgers.

“He had fun going up and down the aisles with the collection plate. It was hilarious,” Schiefelbein recalled. “Money was just flying.”

The Dodgers left Vero Beach in 2008 and the Schiefelbeins followed in 2015. They had been coming to the family getaway on Lower Post Lake in Langlade County for years and decided to make the move north permanently. They purchased the cottage on Lower Post Lake, making it their year-round headquarters.

They received a hearty welcome from Fr. Dave Zimmerman and parishioners at Holy Family.

“Fr. Dave is fond of saying, I know how to rope people in,’ Schiefelbein said. “He said I had an interesting voice that carried well in church and pretty soon roped me into doing prayers and Scripture readings.”

In 2016, Fr. Zimmerman “got his rope out again and we took over the religious education classes,” said Schiefelbein. He was soon leading Bible study programs, filling in as a lector, leading Communion and adoration services at the sister congregation, St. Mary Parish in Pickerel, and guiding the parish’s 11-week Alpha program.

As the COVID-19 pandemic shut down in-house worship services, Schiefelbein used his technical skills to set up webcams to broadcast liturgies and worship services over Zoom.

“People could tune in and watch us and we could see them,” Schiefelbein said. “We did that for nine months.”

A year ago, Fr. Zimmerman became ill and God whispered again. The Schiefelbeins were among the first to step in, leading prayer services and assisting the priest, following his release from the hospital.

Schiefelbein shows no signs of slowing down. He continues working as a real estate agent and enjoying his life with his wife and extended family. And he remains vital to the continued successes of the small Holy Family Parish as it moves beyond the pandemic.

“Stay tuned,” he said. “Every day is a new chapter in the book, you just need to listen.”

Name: Ken Schiefelbein
Age: 78
Parish: Holy Family, Elcho
Favorite saint: John Vianney
Words to live by: “Follow what it says in the Good Book. Don’t be afraid. Please don’t be afraid. God is with you in whatever you do.”