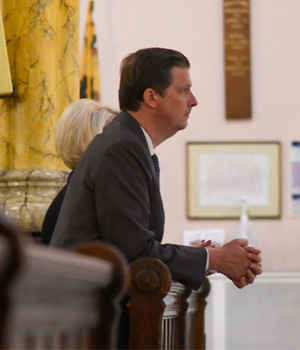 Ambassador Eduard Habsburg-Lothringen, Archduke Eduard of Austria, presents a program at St. Mary Mother of God Church in Washington on his relative Blessed Karl of Austria Oct. 21, 2021, his feast day. Since 2015, the archduke has served as Hungary’s ambassador to the Vatican and the Sovereign Military Order of Malta. Blessed Karl was the last reigning emperor of the Austro-Hungarian empire and died in exile in 1922 at age 34. (CNS photo/Krister Holladay)

WASHINGTON — As is evidenced by the quantity of Netflix/Hallmark/Lifetime movies on the subject, Americans are somewhat obsessed with royalty.

Case in point is the popularity of Eduard Habsburg-Lothringen, Archduke Eduard of Austria, who since 2015 has served as Hungary’s ambassador to the Vatican and the Sovereign Military Order of Malta.

At last count, the archduke has 41,700 followers on Twitter — the majority of whom are Americans.

Habsburg-Lothringen was in Washington Oct. 21 to attend a Mass on the feast day of his relative Blessed Karl of Austria at St. Mary Mother of God Church. He presented a program about the life and legacy of the last reigning emperor of the Austro-Hungarian empire, who died in exile in 1922 at age 34.

The archduke shared his thoughts on the royalty phenomenon and what faith and family life is like for a person of royal heritage.

“I would say that Americans are fascinated with royalty, either because it is something rather exotic in everyday American life or perhaps because they see something pure and reliable in it, mostly through impressive, extraordinary characters like Blessed Emperor Karl,” said Habsburg-Lothringen.

Blessed Karl, who was deeply devoted to the Eucharist and the Sacred Heart of Jesus, was beatified by St. John Paul II in 2004.

Living out his own royal love story, the archduke and his wife, Baroness Maria Habsburg-Lothringen, have been married 26 years. “It was the greatest decision of our lives,” he said. “We heartily recommend marriage. We have six beautiful children, five of them daughters.”

As Hungary’s ambassador to the Vatican, Habsburg-Lothringen has been very impressed by what his own country is doing for families.

“The government is running an ambitious program to encourage couples to have more children which has resulted in a growing number of marriages and children, diminishing divorces and abortions,” he explained. “Apart from that, I’m proud of the help we give to persecuted Christians and religious minorities all over the world.

“In addition, Hungary stands for many concepts near and dear to my heart — sovereignty of nation, patriotism and a constitution that begins with the word God,” he said. “Christian faith is very present in our public square but also within the government.”

Like any working parent, balancing work and home life takes effort for Habsburg-Lothringen.

“It does help that my embassy has the ground-floor office and our residence is on the first floor so we spend quite some time together during the day,” he told Catholic News Service.

“Sometimes in the afternoon when it gets calmer, one of our daughters comes down and sits in my office to do her homework,” he said. “And, occasionally, when I have a very serious meeting, the trampling of feet on the ceiling above me reminds me I am a family man.”

Favorite activities for the Habsburg-Lothringen family include reading, watching wholesome movies and taking walks or runs in parks. “My daughters are big on cooking. I am more on the eating part of business,” commented Habsburg-Lothringen.

The Habsburg-Lothringens do their best to live a Catholic family life, the ambassador noted. “We go to Mass on Sunday and try to do so at least once during the week,” he said. “We try and mostly manage to say a rosary together in the afternoon. We talk about faith topics. Being around the Vatican, we often get priests to visit — so a chaotic family lunch with a priest is a normal thing.”

Six years ago, the entire family was introduced to Pope Francis. When they attend Mass at St. Peter’s Basilica, they get to see him celebrate Mass as well — the ultimate “Take Our Daughters and Sons to Work Day.”

“I get to see the pope from time to time when I accompany ministers or other politicians to meet him or when I bring guests from Hungary to the Wednesday audience or at special occasions like when the pope traveled to Hungary this past month,” he said.

Even though Habsburg-Lothringen is an archduke and technically his children are archdukes and archduchesses, he said that nowadays the titles are more or less historical.

“However, I think it is important to know and value historical connections,” he said. “We live in the time that is far too intent on canceling history and toppling statues.”

Regardless of how the movies portray royalty, it’s not expected that a member of the historic Habsburg family marry someone in their political or social circle. “For most of my family, the most important part is that your future spouse is Catholic and ideally a devout one,” he said.

In addition to his role as ambassador and diplomat, Habsburg-Lothringen is an author His children’s book “Dubbie: The Double-Headed Eagle” was released in English in 2020 and is in the process of being translated into Italian and German.

“Having worked in producing animated cartoons as well, I am a great fan of animation and I have a weakness for Japanese anime,” he added.

When an attendee of the Blessed Karl program mentioned that the saintly man would be proud of his descendent the archduke, Habsburg-Lothringen was clearly touched.

“Blessed Karl was an incredibly pure and upright man and such people inspire me,” he said. “He lived his three vocations as husband, father and emperor to the fullest. He loved his wife with all his heart. He offered his death for his people.”

As a Catholic and a parent, Habsburg-Lothringen has hope for his children’s futures.

“A Catholic has to be full of hope,” he said. “I sometimes worry about developments in society that make me fear in what kind of world my children will live. But, when I see how competently — and with the Lord — my children are on the way, hope wins out.”