Monthly men’s program in Sherwood runs from October through April 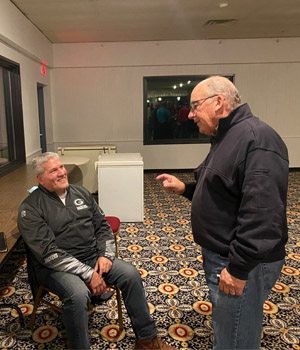 Zig Merckx, seated, talks with Tom Schmit at Hops & Hope, Nov. 8 at High Cliff Golf Course in Sherwood. Merckx was the featured speaker at the event. He shared his story of survival after suffering a massive heart attack in November of 2019 and receiving a new heart the following month. (Jeff Kurowski | The Compass)

SHERWOOD — Grab a beverage and gather to listen to a speaker. This simple program format is attracting large turnouts of Christian men, some coming from significant distances.

Men’s Hops & Hope, which returned in October to begin its third year, is held the second Monday of each month in 3 Putt Pub at High Cliff Golf Course. The hour-long program begins at 6:30 p.m. Freewill donations offset the speaker’s travel expenses or benefit a nonprofit organization.

“It’s been going strong,” said Dave Goeser, program founder and coordinator. “I think we had 125 to 150 people last month.”

Cam Tribolet, author of the book “Dead 13 Times,” which chronicles his journey of hope following being shot three times in a carjacking, was the October speaker. On Nov. 8, Jamie “Zig” Merckx was the featured speaker. Following an opening prayer and reflection about the importance of prayer by Dave Hoh of Holy Spirit Parish, Kimberly/Darboy, Merckx told his survival story, described as a miracle by the doctors at University Hospital (UW Health) in Madison.

Merckx, who coached football for 22 years at Kimberly High School, including 13 as head coach, suffered a massive heart attack on Nov. 24, 2019. He was given a less than 1% chance to live. One month later, in late December of 2019, he received a heart transplant.

“I biked four times a week. I had checkups twice a year. Two days before I had the heart attack, I shot a 173-inch, 12-point buck. I dragged the buck up the hill in Richland County (Wis.),” said Merckx, a member of St. Paul Parish, Combined Locks.

Encouraged by his doctor to share his story, Merckx is working on a book, which he intends to title “Less Than 1.” He said that he is relying on hospital notes and information from family and friends to complete his story.

“I was (hospitalized) for 102 days and I only remember 25,” he said. “UW-Madison is probably the best place to be for a heart transplant. It was quite the miracle, from the second it happened, until the day I left. The doctor said, ‘You walked a tightrope, and you did it. Any deviation and you’re gone.’”

Merckx spoke about the strength of his family throughout his medical journey.

“My family had all the trauma. I didn’t. I laid there and got better,” he said. “They are the ones that had the trauma every single day. The first two weeks were touch and go. They had to endure all of this. I just can’t imagine what that was like.”

Merckx never drank, smoked or did drugs, which pushed him to the top of the transplant list. He “could not leave the hospital without a new heart,” he said.

“I spent 88 days in the ICU (intensive care unit),” he said. “I’m not sure how many times I flatlined. It was quite a bit. I was on life support the first two weeks.”

Some humorous moments at the hospital were woven into his talk. Merckx had visitors from morning until night each day he was hospitalized. “If this was during COVID, there is no way I would have made it,” he said. “The support, the love, everything about that is what kept me going.”

He shared the story about how a hospital housekeeper would stop by his room each morning, to hold his hand. Then she would say, “You’ve got this Zig,” and pray with him.

Merckx has spoken to the heart donor’s mother by phone and looks forward to meeting her in person. He hasn’t listened to his heart yet (by stethoscope) — he’s waiting to do that together with her.

He provided this parting message for the Hops & Hope audience.

“Faith destroys fear. Without hope, there is no cure. Love was my inspiration and humor was my best medication,” said Merckx.

The Nov. 8 collection was donated to the UW Foundation to benefit UW Health at Merckx’s request.

Goeser, a member of St. John-Sacred Heart Parish, Sherwood, traces the formation of Hops & Hope back 10 years to when he was invited to attend a program called “Men’s Connect” in the Fox Valley.

“Someone invited me. I set a little note on my desk and it sat there for months,” he said. “I thought, I’m going to check this out. The thing I realized — there were maybe 30 guys there — was (that) it was just a bunch of normal guys trying to get better in their own lives.”

Men’s Connect disbanded about six months after Goeser started attending. He prayed about starting a new program for years, which eventually led to the founding of Hops & Hope. Goeser estimates that 80 to 90% of the men who attend the program are Catholic, but it is open to men of all faiths, adding that it is suitable for teens and older.

Some men travel significant distances to attend, including from Marinette, Sturgeon Bay and Cedarburg, said Goeser, who is assisted in leading the program by Bruce Weiland of St. Edward Parish, Mackville, and Joel Kuplack of St.  Mary Parish, Menasha.

Tom Schmit, a member of St. Bernadette Parish, Appleton, served as emcee at the Nov. 8 gathering. He first met Goeser at the Wednesday men’s gathering at St. Bernadette, leading to his participation in Hops & Hope.

“Dave’s done a really good job. Some guys just need to be invited,” said Schmit. “Everyone is here to listen, to catch that one little nugget. The best thing about this is you just have to show up and be open to the spirit.”

“I want to get men out there spreading the word of Christ,” said Goeser.

The next Hops & Hope gathering will be held on Monday, Dec. 13. For more information, visit hopsandhope.wixsite.com/home.