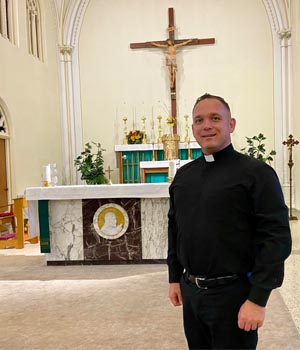 Fr. William Brunner stands inside the historic St. Gregory Church in St. Nazianz. It is home to one of two parishes he was recently appointed to lead. (Suzanne Weiss | For The Compass)

MANITOWOC — After six years as a Navy chaplain, Fr. William Brunner has returned to Manitowoc County.

“I’m excited to be at these parishes,” Fr. Brunner said. “I already feel at home.”

Prior to his service on the high seas, he had served at three parishes in Antigo and at St. Francis of Assisi Parish in Manitowoc. The need for priests in the diocese brought him back to the area.

What drew him to serve as a military chaplain in the first place?

“There were two reasons. The first one is a lifelong childhood fascination with the Navy and the sea. That comes from growing up in Manitowoc and seeing the submarine (USS Cobia) every time you went downtown,” he said. “The second facet is, when I was a seminarian in Rome, my parish assignment was the chapel at Naples Navy base.”

Fr. Brunner was commissioned as a lieutenant in the Navy. His first assignment was serving as one of two chaplains on the USS America, an amphibious assault vessel that delivers marines to combat zones.

“Being on a ship has a way of focusing your attention,” said Fr. Brunner, who learned to hone in on his ministerial duties amid the hustle and bustle. “Wherever the ship is located is going to be a hub of activity because it is such a large ship. Between the sailors and the marines, there are more than 3,000 people on board.”

Most aboard ship skew younger than the general population and come from a generation that wasn’t raised in church, he said.

“I think there’s a stereotype that young people are hostile to religion. I didn’t find that,” Fr. Brunner said. “I learned how to approach them and really listen. The young people often have questions about meaning and purpose. There is a spiritual and religious curiosity.”

From the USS America’s home port in San Diego, he deployed once, with stops in Malaysia, Singapore, Israel, Dubai and Bahrain.

Sometimes he was needed elsewhere than on the USS America. “They’d do the ‘holy helo,’ the helicopter which carried me to smaller ships that may have gone weeks or even months without a priest,” he said.

His second assignment was as a base chaplain at Naval Base Guam, on the tiny U.S. island territory that measures eight miles wide and 22 miles long, making it less than half the size of Manitowoc County.

“That was the first time I was called to lead a Catholic community, because I was always an associate (pastor) before that,” said Fr. Brunner, 37.

“I really enjoyed my time in Guam. People often forget that it’s part of the United States. The people are proudly American and proudly Catholic. The Catholic religion is so important to people that the territory recognizes All Souls Day and the Immaculate Conception as territorial holidays.”

His main connection with the local community was through Our Lady of Guadalupe Catholic Church in Santa Rita.

Fr. Brunner has brought home lessons he learned while serving in the Navy.

In addition to learning how to tune out external distractions, he got a lesson in the prudent use of resources, he said.

“The way the budgeting works in the military, it goes through periods of feast and famine. Sometimes when you ask for something for your ministry, you’re going to be told ‘no.’ You just have to make it work … to use limited resources well,” Fr. Brunner said.

On the other hand, when there is an abundance, you also have to learn how to use it wisely, he said.

Fr. Brunner was ordained to the priesthood in 2011 by Bishop David Ricken at St. Francis Xavier Cathedral in Green Bay.

His parents, Bill and Rosemary Brunner, own Poplar Farms Sales and Service in Manitowoc. He is the youngest of four children and had an inkling that he wanted to be a priest as early as second or third grade. Fr. Brunner graduated from Valders High School in 2002.

After graduating in 2006 from St. Norbert College in De Pere with a bachelor of arts degree in philosophy, Fr. Brunner was accepted as a seminarian for the Diocese of Green Bay and enrolled at Mundelein Seminary, Mundelein, Ill.

Fr. Brunner looks forward to his latest assignment. “I appreciate that I was assigned to smaller parishes since it helps facilitate stronger personal connections with the parishioners,” he said.