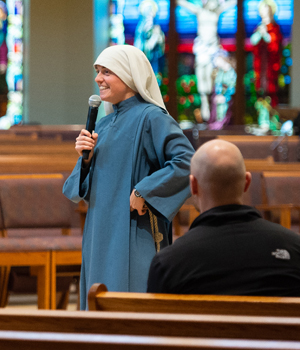 Sr. Marie Bernadette of the Sacred Heart, a member of the Missionaries of the Word, addresses eighth-graders from Green Bay Area Catholic Education (GRACE) during a vocations fair at St. John the Baptist Church in Howard. Seated at right is Fr. Adam Bradley, assistant vocation director for the Diocese of Green Bay.

HOWARD — Keynote speaker Jonathan Blevins wasted no time engaging his audience of GRACE (Green Bay Area Catholic Education) eighth grade students at the 2021 vocations fair. Early in his talk, he called on the young people to respond to some “hot takes” by standing if they agreed.

While takes such as “cheese is the greatest food of all time” drew a mixed response, Blevins finished the segment on a high note. “Being Catholic is the best,” his final take, prompted everyone in the pews at St. John the Baptist Church to stand.

The event on Nov. 10, the first of its kind in the diocese, featured the theme “Quo Vadis? Where are You Going?” and was offered in partnership with the diocesan Office of Vocations and the Office of Catholic Schools. Transportation and lunch for the students were provided by a grant from the Catholic Foundation.

The vocations fair was two years in the making, said Lori Paul, advancement director for Catholic Schools for the Diocese of Green Bay.

Paul added that the plan is to offer the vocations fair annually and possibly expand it next year.

Blevins, who has been streaming video games on Twitch (an interactive livestreaming service) for more than three years and is the host of Super Squares TV, mixed personal stories and humor with messages about faith and vocations in his talk. His experiences working at Chuck E. Cheese, riding his new Big Wheel bike and competing with his family on the Family Feud game show drew some laughs, but he took a serious tone as well, describing a difficult time in his life at age 16. His girlfriend had broken up with him and he lost his job. During that time, he asked God a question: “Who are you?”

“I had been going to Mass my whole life and I really had no idea who (God) was at all,” he said. “I opened the Bible.”

Blevins, a Detroit native who moved to the Chicago area at age 6, addressed the phrase “God is love.” It’s more than something “cheesy” written on a poster, he said.

“‘God is love’ is a bold statement, because love requires relationship,” he said. “A relationship requires more than one person.”

He also instructed the young people not to think of God as a judge or ruler in the sky.

“Every single time we mess up throughout Scripture, throughout church traditions, in history, in our own lives, (God) is right there to make it better,” he said.

When discussing vocations, Blevins gave a shout-out to religious sisters.

“A joyful sister can change the world, and I mean that,” he said. “You can be walking in downtown Chicago, see a sister in her habit, (and) ask her for a high-five and a prayer. … They will share the love of Jesus.”

Blevins, known as “Bearded Blevins” online, explained that, if he asked the eighth-graders to raise their hands if they were open to being a priest, religious sister or brother, that every hand should go up.

“If you understand who God is and who we are, it’s not scary at all,” he said. “It’s the greatest adventure that we could ever go on.”

Why are people scared of the call?

He offered “five things” to the students to help them follow God:

The vocations fair marked a return to the Diocese of Green Bay for Blevins. He credits his friendship with Fr. Daniel Schuster, former vocation director, and the generosity of Bishop Dan Felton for first bringing him to the diocese. Blevins spent eight years in Manitowoc, where he served as a youth minister for St. Francis of Assisi Parish. He earned a theology degree from Silver Lake College in Manitowoc and a master’s in theology from Fordham University in theNew York.

“I love the Diocese of Green Bay. I love Bishop (David) Ricken. I love the Franciscan Sisters of Christian Charity (Manitowoc),” he said in an interview with The Compass. “I still have many friends here. It’s cool. A lot of people I ministered to as a youth minister are working in the church. It’s always good to be back.”

Blevins and his wife, Jodi, a Brillion native, reside in the Chicago area with their three young children. He recently started Little Flower Media.

“The purpose is to be present as authentic Catholics on the internet, use social media, Twitch and YouTube, podcasting,” he told The Compass. “It’s really ‘pre-evangelization.’ We are not doing Bible studies on Twitch, although that could be something that we could grow in. We are trying to be a place where most of the world is — online. Be our authentic Catholic selves and have them ask genuine questions about the faith.”

“This is a really great event for (the students) to get to see the different vocations, the different religious orders in Wisconsin,” said Sr. Cecilia Joy Kugel, representing the Franciscan Sisters of Christian Charity. “It’s nice to see their joyful energy and to be able to answer their questions.”

“(Blevins) did such a wonderful talk about the possibilities of what God is calling us to,” said Norbertine Fr. Jordan Neeck. “Vocation is irrational and crazy because it goes against what the world tells us. It doesn’t make sense, but it brings so much beauty and fruit.”

Sr. Laura Zelten, representing the Sisters of St. Francis of the Holy Cross, Bay Settlement, surprised some young people when she told them that her community was founded prior to the Diocese of Green Bay and how they make their own energy.

“It’s great to meet them,” she said. “I think the message is that religious life is joy-filled. It’s a good life. Don’t be afraid to ask your questions if you are thinking about becoming a priest or a sister. It’s an ‘in’ thing, not a bad thing to do. I feel blessed to be here. I really do.”

The day also included adoration and closed with prize drawings.