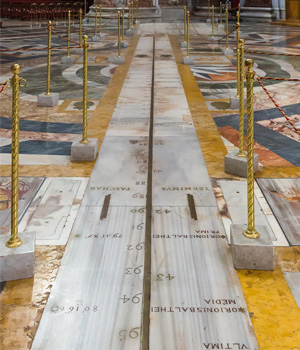 The meridian solar line in the Basilica of St. Mary of the Angels and the Martyrs (Santa Maria degli Angeli e dei Martiri) in Rome. In the center is the Terminus Paschae, which marks the full moon after the spring equinox.

North and south-running lines of longitude on a map or globe marked worldwide time before smart watches and atomic clocks. The use of meridians brought uniformity to timekeeping and navigation.

When the sun passed the north and south line marked “zero longitude” and called “the Prime Meridian,” it meant it was noon at Greenwich, England. The Prime Meridian was established in 1884. Most countries’ time zones were eventually based on that meridian. (The current standard is Coordinated Universal Time, or UTC, established in 1960.)

The word “meridian” comes from two early Latin words: medius for “middle” and dies for “day,” becoming meridianus for “noon” or “midday.”

You can’t see the Prime Meridian, except on a map. A spot in Greenwich, now part of London, marks the site of the meridian at the Royal Observatory there. However, you can also see physical meridian lines in various locations around the world — some in cathedrals such as the Basilica of San Petronio in Bologna, Italy, the Basilica of Santa Maria degli Angeli e dei Martiri in Rome, and the Church of Saint-Sulpice in Paris.

As Daylight Savings Time ends on Nov. 7, the history of using meridian lines in churches for nearly 200 years can shed light on timekeeping history. Physical meridian lines were used to tell time. They still can, although some buildings’ floors or ceilings have shifted over time and made those lines no longer accurate.

Meridian lines consist of a mark along the church floor — usually delineated in metal — and a hole in the ceiling, often decorated to look like a star or sunburst. Cathedrals and basilicas were used for meridian lines because of their long, open floors and high ceilings. The long metal lines were set in precise north and south directions. For example, the meridian line in San Petrino in Bologna is 219 feet long and its oculus (the ceiling hole) is 89 feet above it.

Meridian lines served two basic purposes — to tell the hour of the day (daylight only) and the time of the year. Meridian lines marked the spring and winter solstices (and the equinoxes in March and September) as well as solar noon — when the sun reaches the highest point in the sky — in a time when few watches existed, and clocks were not always accurate.

Consequently, church bells often struck “noon” at varying times. This was a problem, and an especially noisy one in large cities. With a meridian line placed in the largest church, all the clocks — and bells — could be synchronized.

Of course, it was not Europeans who invented meridian lines — in Western culture that honor goes to the ancient Greeks. However, meridian lines became quite popular in Europe in the early 17th century and remained so until the 19th century, when solar observatories and telescopes eclipsed them in accuracy.

A meridian line works with what is basically a camera obscura — a hole in the ceiling projects an image of what is outside onto a surface beneath it. For a meridian line, this means that sunlight enters the oculus and shines on the floor, moving along as the sun climbs to zenith and then drops toward sunset. If the hole is aligned properly, the circle of sunlight crosses the meridian line at noon on any sunny day.

Some churches have sundials along the meridians to calculate other hours, markers to tell the month and even the day of the month. Some churches, such as San Petrino, also have zodiac signs on the floors, not for horoscopes, but for astronomers to determine which constellations were rising in the sky at any time of year.

The Vatican has maintained an astronomical observatory since 1891. Today, they have two sites, one at Castel Gandolfo, Italy, and another at the University of Arizona in Tucson. The observatory’s roots go back to 1582, before meridian lines became popular.

In 1582, Pope Gregory XIII changed the calendar from the flawed Julian Calendar to the presently used Gregorian Calendar. The corrections resulted in “losing” 10 days in October that year — Oct. 5-14 were removed to bring Oct. 15, 1582, and all dates following in line with the solar calendar.

While the Vatican did not construct any meridian lines, its first unofficial Vatican observatory was built in 1774 in Rome. And church approval was needed to place meridian lines in church buildings.

As science historian John Heilbron, author of “The Sun in the Church: Cathedrals as Solar Observatories,” noted, “The story of the meridians lies at the intersection of many fields now usually held apart: architecture, astronomy, ecclesiastical and civil history, mathematics and philosophy. And the work of the meridian makers shows that men whose careers were underwritten in whole or part by the church made important contributions to the development of modern astronomy.”

This was the case when Cosimo de Medici, grand duke of Florence, wanted mathematician and Dominican friar, Eganzio Danti, to build a meridian line in the Church of Santa Maria Novella.  Danti’s work was approved, but Cosimo died in 1574, before that meridian line was completed. Danti was then sent by his superiors to Bologna, where he eventually built a meridian line — a flawed one — in the Basilica of San Petrino in 1575. In 1653, the Jesuit astronomer, Giovanni Cassini, was appointed to repair and perfect Danti’s line.

Today, there are at least 20 cathedral meridian lines still in existence. However, you can follow your own meridian line using any sunny window, as long as it gets sunlight at noon.