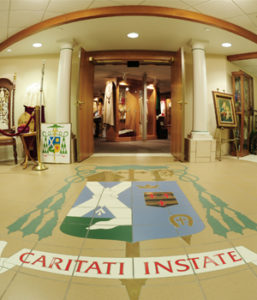 The Green Bay Diocese Museum and Cultural Center is located in the basement of St. Francis Xavier Cathedral in Green Bay. The museum is undergoing reorganization to allow for new exhibits. (Sam Lucero | The Compass)

GREEN BAY — Do you have old faith-related items that might be of historical interest?

The Green Bay Diocese Museum, located at St. Francis Xavier Cathedral, is currently closed to rework its exhibits and plans to reopen in the spring. However, it is still looking for donations or items on loan, dealing with the history of the Catholic Church in northeastern Wisconsin for an upcoming series of exhibits.

The museum volunteers have been reviewing inventories of artifacts and plan to organize them into historical displays covering four time periods: 1600 to 1900; 1900 to the Second Vatican Council; Vatican II itself and post-Vatican II to the present day. The displays will rotate every 12-14 months, except the one on Vatican II, which will be shorter.

The first display — 1600 to 1900 — is scheduled to open on May 1, according to Sherry Steffel, president of the board for the museum. Fr. Brian Belongia, cathedral rector, is the museum’s director.

“The underlying theme here (for the exhibits) fits with Msgr. Roy Klister’s idea,” Steffel explained. “He wanted it to be an education facility, not just a display facility.” (The late Msgr. Klister was cathedral rector when the museum was founded in 2004.)

Steffel also credits Bishop David Ricken, whom she said visits the museum every Friday, for the upcoming displays. Steffel said the bishop told her, “I always see the same thing” on his visits and indicated he would like a changing exhibit so he could learn more about the local history.

That also led the museum board to decide to add an exhibit on the Second Vatican Council, featuring the diocesan newspaper.

“We have all the Green Bay Registers (the newspaper predecessor of The Compass) from before, after and during the time of the council,” Steffel said. “This would be more of displaying the Green Bay Register pages, which show how people made the changes. They didn’t always have time (to learn about these council changes) in Sunday homilies.”

Steffel also noted that, thanks to the estate of Fr. William Stengel, the Register’s first associate editor and later its editor, the museum “has every single one of those papers. … It’s the only complete set in the world. Yes, there are microfiche copies, but it’s not the same as holding that paper in your hand.”

Steffel told The Compass that the cathedral has received “a lot of phone calls,” asking when it will reopen and when they can bring school tours. She explained that checking the inventory and formulating staging plans takes time for the all-volunteer team. Each item has an identifying card and, prior to staging the time period displays, these are being double-checked. Steffel describes inventory checking, along with cataloging new acquisitions, as “just incredible detective work.”

Examples of interest for the first display — the earliest years of the diocesan area of northeastern Wisconsin — will include items from the first bishops, the pro-cathedral of St. Mary’s (the predecessor to St. Francis Xavier), and early Mass items such as vestments and sacramental objects like chalices and altar cloths. There will also be items from early missionary and religious orders, like the Ursuline Sisters, who were invited here by Bishop Joseph Melcher (1868-73).

Also included will be a recent acquisition: early Knights of Columbus uniforms — both pre-1900 (which includes a tuxedo and two beaver top hats) as well as the more familiar uniforms with swords, capes and plumed hats. In 2019, those caped uniforms were updated and the Knights now wear jackets and berets.

“I wouldn’t want these in somebody’s bar,” Steffel said, when discussing the Knights’ now-unused attire. “A lot of items show up that way after they close churches.”

That is also why she is asking people to donate old religious items that they might have stored away, so nothing gets lost to history.

Even if an item turns out not to be Catholic in origin, Steffel’s team is happy to track down a good home for it. For example, the museum had a very old Bible which turned out to be a King James Version (Protestant). It was then donated to First Presbyterian Church in Green Bay.

Another item in the inventory was clearly a liturgy artifact, but not a Roman Catholic one, since it had Greek lettering on it. Steffel sent photos of the rectangular decorated linen to the monks at Holy Resurrection Monastery in St. Nazianz. They identified it an “anti-mension,” given by Byzantine-rite bishops to priests at their ordinations. A Byzantine priest cannot offer the Divine Liturgy (the Mass) without one and it serves as a type of altar.

“Anti-mension” is Greek for “without a table” and its cloth bears an image of Christ being brought down from the cross for burial. The museum donated it to the monastery in St. Nazianz.

Anyone with items they feel might be of interest to the museum for its inventory, either permanently or on loan (even anonymously), should call the cathedral at (920) 432-4348.