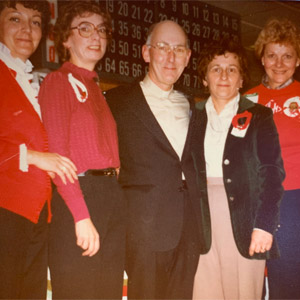 The first officers of the Nativity Women’s Guild, founded in February 1982, are pictured with Fr. Willie VanDeLoo, who encouraged the guild’s establishment. The officers included Carol Schuld, left, Barb Cooney, Katie Steinman and Shirley Lins. (Submitted Photo | For The Compass)

ASHWAUBENON — The Nativity Women’s Guild, an outreach ministry at Nativity of Our Lord Parish, is celebrating its 40th anniversary in 2022. Since it was established on Feb. 4, 1982, with seed money totaling $50, the organization has raised over $300,000 in support of the parish.

“Then-pastor Fr. Willie Van De Loo invited Nativity parishioners interested in forming a Christian Services Commission, including a Catholic Women’s Guild, to a meeting in the basement of the rectory,” according to Carol Fountain, guild member. “He provided $50 of seed money for the guild’s formation.”

“Half the church is women, and I thought the leadership should reflect that,” said Fr. Van De Loo.  “I had no idea it (the guild) would grow so much over the years; it’s a lot of work. It was well organized and had strong leadership.”

“These women were well-connected in the community and hard workers,” recalled Fr. Van De Loo. The young organization grew to 56 members in a short time. Guild leaders wrote a constitution, bylaws and a mission statement, which stated that the guild sought to “unite the women of the parish, promote their spiritual and temporal welfare, and to help fill the needs of the parish in the form of fundraising events.”

Fundraising continues to be an important role of the guild. Its most impactful fundraiser, she added, is its Winter Wonderland Bazaar, held the Saturday before Thanksgiving each year. This year it will be held on Nov. 20 from 8:30 a.m. to 3:30 p.m. “Even during the pandemic in 2020, the guild managed to have an online auction, ‘to-go’ chili and holiday cookie box, which raised over $4,000,” she said.

Among the many donations made to the parish include a grand piano and a “Three Kings” Nativity scene, as well as “behind-the-scenes” contributions, such as lawn mowing, snow removal equipment and an updated phone system.

Beyond fundraising, the guild provides ministry outreach opportunities for members. During the COVID-19 pandemic, for example, the guild has offered “spiritual sister” telephone connections among members. Each member also got a personal porch visit (and Christmas ornament) during Advent last year.

“Guild members also show solidarity by attending the funerals of fellow members and loved ones at Nativity, by acknowledging members when ill or hospitalized, and by praying for one another’s special intentions at meetings,” which have now resumed, said Fountain.

Fr. Matt Simonar, current pastor, said the guild’s greatest strength today “is the generosity of its members. Many of them live very busy lives and they could give a lot of excuses to not volunteer, but they see that they have a lot to offer and give of their time and talents for the good of Nativity Parish,” he said.

As the Nativity Women’s Guild prepares to celebrate its 40th year, Fr. Simonar said he would like to see membership grow. “If more ladies could see all the good things that the guild has done for the parish these past 40 years, they would be inspired to offer their talents as well,” he said.