Born blind, Shirley Schmid finds that the Lord is there to help ‘if we let him’ 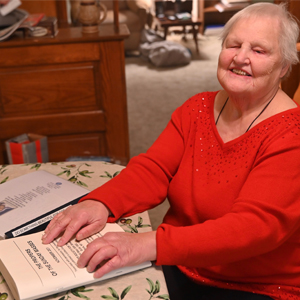 Your Catholic Neighbor: Shirley Schmid (Michael Cooney | For The Compass)

OSHKOSH — Shirley Schmid was born blind in the small town of Promise, Iowa. But with a sense of humor, a faith in God and support in education and training, she has maintained a joyful life.

“I was born blind, so I didn’t have to adjust to it,” she said. “The Lord has wonderful ways of helping us if we let him.”

As a toddler, she was sent to the Iowa School for the Visually Impaired in Vinton, Iowa, graduating in 1957. There, she learned everything taught in regular schools as well as Braille, typing and other skills to navigate life.

“We live in a sighted world,” she said. “We’re the minority. I’m glad I live in this world today. There is a lot more for blind people today.”

She came to Wisconsin in 1958 to work in a fishing rod plant in Chilton. “I put fishing rod handles on,” she said.

Schmid wanted to be a speech therapist, but that would have required her to travel from city to city and she could not provide transportation for herself. Instead, she trained as a masseuse and took a job in the women’s department of the Eau Claire YMCA.

There, she met Chuck, the masseuse in the men’s department. He was visually impaired, too, but could read large print and ride a bicycle. “We rubbed each other the right way,” Schmid said with a laugh.

They married and moved to Oshkosh, where he took a job in 1963. Schmid stopped working when they had children, Allen in 1964 and Lisa in 1965. “Allen was my ‘exploring’ child,” Schmid said. “He would run away.” She said they put bells on his shoes so they could track where he was going.

“He must have had a guardian angel,” she said. “The good Lord protected him, and we managed to get him raised.”

Her third child, Wendy, died at the age of 6 months. “That was very hard and I blamed God and was very angry for a while,” she said. But she focused on her young children who needed her and came back to her faith. She later joined Compassionate Friends, a grief support group.

“I was able to tell people they would, in time, get their life back, get their faith back,” she said. “They would live again. It gave them comfort and made me feel good to give them comfort.”

Also enhancing her quality of life is Xavier Society for the Blind in New York City. Since 1900, Xavier Society has provided free Braille and audio books to blind and visually impaired people worldwide so they can learn about, develop and practice their Catholic faith.

Schmid said she has been getting materials from them “for so many years I can’t remember.” She gets spiritual and religious books in Braille and audio books downloaded on her computer, such as biographies of saints and books on the rosary and Lent. “I can be a part of the Mass,” she said. “I can do everything (sighted people) can. I can keep abreast of current issues.”

She said she is happy with her life. She has her son and daughter, seven grandchildren and 10 great-grandchildren who visit often.

Schmid loves being a member of St. Jude because there are so many activities there, she said. She belongs to Young at Heart, a seniors group, participates in Bible studies, attends seminars and workshops, and goes to Mass every Sunday using the “Braille Propers.”

“If you want to get to know your parish, it’s good to get involved,” Schmid said. “I don’t want to just sit at home.”

She also calls people for the prayer chain and enjoys shopping, cooking, baking, reading, singing and playing with her little ones.

She leads a visual support group that meets at Evergreen Retirement Community. Many in the group have been sighted and then lost their sight. They often come distraught at first because they can’t comprehend how they will be able to adjust.

“It’s fun to watch them blossom, do the things they’ve always done, just do it different,” Schmid said. “They have problems, and we try to help. We’re just like others, except we can’t see. You have to have a sense of humor.”

In a grateful note to Xavier, she wrote, “Before COVID, I sang at a nursing home, with a group called the Huff and Puffs. I love jokes and am always trying to cheer people up. The good Lord has been good to me. I thank Xavier for providing so many good books and (Mass) Propers in Braille. You are a great service and so very kind and dedicated to us. I am very happy and thankful. I have had and am still having a good life.”

Name: Shirley Schmid
Age: 82
Parish: St. Jude the Apostle
Favorite saint: Teresa of Kolkata
Words to live by: “Prepare for the worst, expect the best and take what comes.”