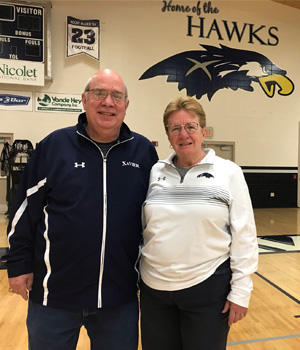 Your Catholic Neighbors: Mike and Kathy Bates (Amanda Lauer | For The Compass)

APPLETON — Mike and Kathy Bates consider St. Francis Xavier High School to be their home away from home. It’s no wonder, seeing as they’ve been actively involved in the Xavier community since they were high school students there in the late ’60s and early ’70s.

The couple, who were high school sweethearts, graduated from Xavier High School in 1971 and married in 1975. Mike earned a degree in communication and journalism from the University of Wisconsin-Oshkosh and Kathy graduated from St. Norbert College in De Pere with an education degree, then went on to earn a master’s degree in reading from UW-Oshkosh.

Kathy was offered a job teaching English at Xavier in 1975. “We didn’t have girls’ athletics when I was in high school. The only thing I could do athletically was cheerleading,” she recalled. “When I came on board, they needed a JV (junior varsity) volleyball coach. That’s how my coaching career began. I eventually went on to head varsity volleyball coach, head track coach and then the athletic director (AD) position kind of landed in my lap.”

In 1992, the previous athletic director, whom Kathy had been assisting, took a job in Green Bay on short notice and the job was turned over to her.

“It was baptism by fire. The first year I taught, I was AD and volleyball coach (in the same year), it was kind of crazy. The year after that, principal Matt Reynebeau came to me and said, ‘Have I got a deal for you. What if I take you out of the classroom and all that paperwork and you become the dean of students and the AD?”

Between those two positions and volunteering as a coach, Kathy was at the high school well over 40 hours a week — and 60 hours a week wasn’t that unusual. Mike, who had a career revolving around sports, including writing for local newspapers and working as the information director for the Wisconsin Athletics Director Association, was an avid volunteer as well.

“I started volunteering at Xavier in 1972,” he said. “I volunteered with the athletic department and the booster club. I started coaching football here — head freshman, head JV — and helped out with varsity when we would have everybody together. I did that for 28 years and I helped out one year with freshman basketball.” In addition, Mike has been a sports announcer at the school for decades.

A major volunteer role for Mike was assisting Kathy through the years. “There was no way I could have done everything without all the volunteer work that Mike did for me — even secretarial stuff,” Kathy noted.

“I’d come up to school to see her and she’d give me a to-do list, so I had to help,” Mike said with a laugh. “But, really, I loved it. Not only working with her, but everybody here including the booster club, the parents. The entire Xavier community is awesome to work with.”

“When we first got into coaching in the ’70s, a lot of the other coaches were the same age and we all believed in the same thing. We wanted to make it a very positive experience for the student athletes in the Xavier community,” said Mike.

Both Kathy and Mike attribute their commitment to volunteerism to the example set by their parents. “Our parents (stressed) that you put your whole heart into everything. Kind of the Midwestern work ethic,” said Kathy. “We can both safely say ‘we bleed Xavier blue.’ Our hearts are really here. Whenever there was a need, we pitched in.”

While their lives were intertwined with athletics, the Bates family, including their son Adam, found plenty of other volunteer activities at the school to help with. “No matter what was transpiring, if help was needed, we were pitching in,” said Kathy.

Mike retired from his career about five years ago and Kathy stepped down from her position at Xavier this past August. “I had thought about retiring the previous year, but then the pandemic hit,” she said, deciding to stay until things somewhat got back to normal.

Entering the Xavier campus today and not going to work is a bit surreal, said Kathy. “I feel like I should be doing something. We probably spent more hours here, through the years, than we have at our house. We live close by, and it was by design,” she said.

A chip off the old block, their son is in the field of athletics as well. Adam works in the athletic equipment department at his alma mater, the University of Minnesota, where he earned a degree in sports management.

In 2019, she was awarded the State Award of Merit, presented by the state to a National Interscholastic Athletic Administrators Association member who demonstrates outstanding leadership and meritorious service and achievement in the vocation of interscholastic administration.

“It’s been a fun ride all the years that we’ve been up here,” said Mike. “Like Kathy said, it was never a job. It was a life that we were committed to and that we thoroughly enjoyed.”