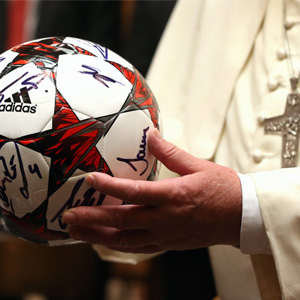 Pope Francis holds an autographed football he received from Bayern Munich’s soccer team during a private audience at the Vatican in this Oct. 22, 2014, file photo. Teams from the Vatican and the Roma community are set to play a friendly soccer match Nov. 21 in an effort to promote fraternity and an end to racial discrimination. (CNS photo/Alexander Hassenstein, Reuters)

VATICAN CITY (CNS) — The Vatican and the World Roma Organization are set to go toe-to-toe at a friendly soccer match to promote fraternity and an end to racial discrimination.

The initiative, sponsored by the Pontifical Council for Culture, received support from Pope Francis who will meet with both teams the day before the Nov. 21 match.

According to a statement Nov. 11 by the pontifical council, the Vatican team, “Fratelli Tutti” is comprised of Swiss Guards, Vatican employees and their children, as well as priests “who carry out their service in the Secretariat of State, the Roman Curia and the Pontifical Ecclesiastical Academy,” the school for priests who will become Vatican diplomats.

And, “to bear witness to the concrete commitment to inclusion and the true meaning of sportsmanship, three young migrants welcomed by the Sant’Egidio Community will play on the ‘pope’s team,'” as well as Filippo Montemurri, a Special Olympics athlete with Down syndrome.

“I am proud of myself,” Montemurri told journalists Nov. 16 during a news conference at the Vatican.

At the briefing, officials announced that Ciro Immobile, a forward for the Lazio professional soccer club as well as for the Italian national team, will serve as referee.

Toti Dedic, president of the World Roma Organization, said he was grateful to the pope for accepting the proposal of a soccer match.

The idea, he said, is “to give, symbolically, a kick to racism, prejudice and exclusion. And we are excited that he accepted our proposal,” Dedic said, according L’Osservatore Romano, the Vatican newspaper.

Lazio soccer club president Claudio Lotito noted the significance of the match’s location at the Lazio club’s training center and said the club welcomed “those who are victims of discrimination and prejudice.”

The club’s fans have come under scrutiny in the past for exhibiting racist behavior during matches. Last year, the Union of European Football Associations, known as the UEFA, fined the Lazio club $22,000 after fans were caught making fascist salutes during a match at Rome’s Olympic Stadium.

“With this match, we insist that the social gap — which has widened due to the pandemic — must be bridged, that we all have the same dignity and that everyone must have an opportunity to realize their dreams and overcome barriers,” Lotito said.

Proceeds collected from the match will go to the “Kick Out Exclusion” program. The goal of the project, which is sponsored by the Diocese of Rome, is to introduce Roma children to local soccer clubs.