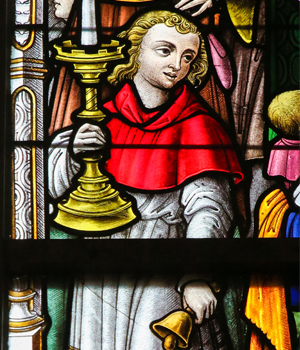 What’s one of the oldest vestments in church history?

Most of us will recognize the thin, white, often lace-adorned shorter garment that covers a cassock and is sometimes worn by acolytes or altar servers. (Yes, the two are different in that acolytes have traditionally been a formally instituted role in the church, while altar servers have not.)

The oldest, and most commonly used, vestment is the alb. This is the long, white garment, tied (cinched) in the middle that most altar servers and acolytes now wear. This is the vestment that every baptized Catholic is allowed to wear. As the General Instruction of the Roman Missal notes, “The sacred garment common to ordained and instituted ministers of any rank is the alb, to be tied at the waist with a cincture unless it is made so as to fit even without such” (n. 336).

In church history, the surplice developed some time after the alb, mostly in colder climates north of Italy. (It never developed in the Eastern-rite churches, whether Catholic or Orthodox.) Today, besides Catholics, Lutherans and Anglicans also use the surplice. In some church denominations, even choir members wear them.

The reason for the surplice is found in its name. It comes from the Latin superellicium, meaning “something worn over fur.” Pellis in Latin means “skin” and most often refers to “fur.”

What happened in the church as it spread into Europe at the end of the first millennium was that it was colder the further north you went. So clergy, like most people in the north regions, took to wearing fur-lined cloaks and garments. However, the alb, with its tied waist and relatively narrow sleeves, bulked up when worn over these heavy fur garments.

So the surplice — with wider sleeves and long, loose skirts — fit better and grew in popularity. As the Catholic Encyclopedia notes of the surplice of the 12th century: “For it is evident that a large-sleeved, ungirdled tunic was better suited to go over heavy fur coats than a narrow-sleeved, girdled alb.”

The surplice was made, at the time, of linen or cotton. The Encyclopedia Britannica notes that, by the 13th century, even warmer Italy had adopted the surplice.

The surplice started out quite long. Its sleeves were also long, no doubt to hide the furs beneath. But, with time, the sleeves and the hem were all shortened.

When lacemaking became a major industry in Europe by the 16th century, lace was added to the surplice at the sleeves and hem. However, surplices are never made entirely of lace and, to this day, are usually white or ivory in color. A surplice is never of any other color, since it is a substitute for the alb, which is always white.

Over time, the surplice became a formal liturgical vestment, not just something to uniformly cover another garment. It became standard for choir dress — the time when religious clergy prayed the daily office together in chapel — and for formal processions. It was also worn by lower levels of the clergy such as deacons, lectors and acolytes (before modern times), and for priests administering sacraments and giving blessings and at Benediction.

While a bishop may seem to wear a surplice — a white lace-trimmed garment over his amaranth red cassock — that garment is called “a rochet” and does not serve a sacramental purpose, as the surplice can for priests. It shows a bishop’s juridical authority and can be worn at Mass, as long as the bishop is not the Mass celebrant. Cardinals, archbishops and even the pope can wear a rochet — which generally has tighter sleeves than a surplice. Rochet is not from a Latin word but is either French or Old Germanic in origin and means “coat.” Some rochets do include embroidery.

A master of ceremonies at the Mass with a bishop or higher prelate also wears the surplice.

Sources: General Instruction of the Roman Missal; the Catholic Encyclopedia; the Encyclopedia Britannica; The Church Visible; ewtn.com; etymonline.com; and divinityclergywear.com.