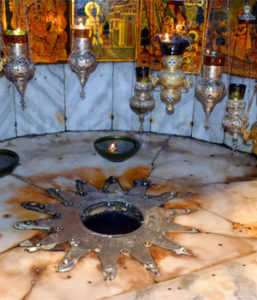 The silver star in the grotto of the Church of the Nativity in Bethlehem. The 14-point silver star marks where Jesus was born. (BigStockPhoto.com)

Did you know the Star of Bethlehem triggered a war?

While tensions are not uncommon in the Middle East, the link between a war and a star in Bethlehem is not well known.

How can a star cause a war? The theft of the silver star of Bethlehem, which marks the place where Jesus was born in the Church of the Nativity, contributed to tensions that set off the Crimean War (1853-56) in Ukraine..

The star lies in the grotto under the Church of the Nativity in Bethlehem. This church (technically a basilica) dates to the year 565. However, it was first built in 330 by the Emperor Constantine and his mother, St. Helena. Helena (or Helen), traveled to the Holy Land to locate and honor the sites of Christ’s life. Thanks to her, we also have the Church of the Holy Sepulcher and the Ascension Chapel, both in Jerusalem.

Fire destroyed the first Bethlehem church in the year 529, although the grotto beneath was saved. Later, when Persians invaded the region in 614, destroying most of the churches, they left this one standing. Legend says that a mosaic of the Magi, dressed in Persian attire, inside the Bethlehem church made the invaders think the Magi were also Persian. So they left the church standing.

Helena’s church had been built over a second-century temple to the Roman god, Adonis. The grotto beneath, though, was already a devotional site for Christians. When the church was rebuilt in the sixth century, the Magi mosaic and some of the fourth-century floor mosaics survived. The sixth-century structure remains today, though it was expanded over the centuries.

Besides Roman Catholics, Armenian Apostolics also have custody of parts of the church. The grotto where Jesus was born contains 15 silver lamps which serve to represent the three groups: six lamps for the Greeks, four for Catholics and five for the Armenians.

This has not been a peaceful coexistence. As recently as 2011, disagreements got physical in the church. This centuries-long tension is how the Crimean War enters the picture. In 1717, a 14-point silver star was installed over the marble slab that marks the birthplace of Jesus in the grotto. Engraved on the star were the Latin words “Hic de Virgine Maria Jesus Christus natus est” (“Here Jesus Christ was born to the Virgin Mary”).

While this is the Greek part of the church, the star bears Latin words. It was not placed by the Greeks and immediately became a source of friction. The star was finally prized up and stolen in 1847. The Greek Orthodox were accused of the theft.

The loss of the star enraged the French, who were quite active in Palestine, and this was used as an excuse for France to enter the Crimean War, which started in October 1853. France entered the conflict in 1854, against Russia — which was an Orthodox nation. While the war was fought in Crimea, one of the reasons for the war was the rights of religious minorities (Christian and Orthodox) to the holy sites in Palestine. These included the Church of the Nativity. Russia wanted to defeat the Ottoman Empire, which ruled Palestine. The entrance of France — and Britain (also in 1854) — in the Crimean War turned the tide and Russia lost. So the Turks retained control.

Before hostilities erupted in 1853, a replica star had been made. However, before it could be placed, the original star, or a replica of it, reappeared in the grotto in December 1853. By then, things had gone too far and the war proceeded.

Today, use of the Church of the Nativity, including who can celebrate prayer and liturgies, and when, is controlled by a document called the “Status Quo of the Holy Places.” The Status Quo was forged in 1852, under the Ottoman Empire’s Sultan Abdul Mejid. Clearly, it took time to take effect and was not truly finalized until 1878 with the Treaty of Berlin. This treaty was written after Russia defeated the Ottoman Empire in the Russo-Turkish War.

Because of the terms of the Status Quo, Christmas lasts from Dec. 24 to Jan. 18 in the Church of the Nativity.

1)  On Dec. 24, the Latin-rite patriarch (currently Franciscan Archbishop Pierbattista Pizzaballa) leads prayer in the grotto at 4 p.m. After Midnight Mass at the nearby Church of Saint. Catherine, the patriarch returns to the grotto to place a statue of the baby Jesus — normally kept at Saint Catherine’s — there. The statue remains there until Jan. 6.

2)  On Jan. 6-7, the Greek Orthodox make a pilgrimage from Jerusalem to Bethlehem, where they celebrate the birth of Christ.

3)  The Armenians, because they use the older Julian calendar, celebrate Christ’s birth on Jan. 18, also in the grotto.

Despite the tensions of past centuries, cooperation between the three custodial churches is increasing. In 2012, the Church of the Nativity was declared a World Heritage site by UNESCO (the United Nations Educational, Scientific and Cultural Organization). It was also placed on UNESCO’s list of endangered heritage sites because of disrepair.

In 2013, the badly deteriorating wooden roof of the church brought about some agreement among the three churches. The resulting repair work is overseen by a joint advisory committee guided by the Palestinian Authority. (Bethlehem is in Palestinian territory.) Besides the roof, frescoes and mosaics have since been restored, along with the outside walls and marble support columns inside the church.

In early December 2021, Franciscan Fr. Ibrahim Faltas, of the Custody of the Holy Land, told Catholic News Service: “This project has brought the three heads of churches closer and improved the relationship. In fact, the three heads of churches agreed to implement rehabilitation work at the Church of the Holy Sepulcher in Jerusalem. We hope that this cooperation will continue in the future.”

Signs of peace in Bethlehem, centered around a grotto with a silver star. The annual spirit of Christmas may last, not only until Jan. 18, but into the Holy Land’s future. That’s what Christmas is all about: Peace on earth, proclaimed in Bethlehem.